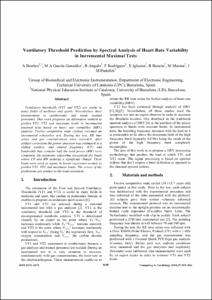 Except where otherwise noted, content on this work is licensed under a Creative Commons license : Attribution-NonCommercial-NoDerivs 3.0 Spain
Abstract
Ventilatory thresholds (VT1 and VT2) are useful in many fields of medicine and sports. Nevertheless, their measurement is cumbersome and needs trained personnel. This work proposes an alternative method to predict VT1, VT2 and maximum loads in incremental maximal tests based on heart rate variability (HRV) analysis. Twelve competitive male cyclists executed an incremental exhaustive test. During the test, RR time series and gas concentrations were recorded. After artifact correction the power spectrum was estimated in a sliding window, and central frequency (CF) and bandwidth that contains half the total power (BW) were computed. An automatic algorithm recognized the loads where CF and BW undergo a significant change. These loads were used as inputs in linear regression models to predict VT1, VT2 and maximum loads. The errors of the predictions are similar to the load resolution.
CitationBenítez, A. [et al.]. Ventilatory threshold prediction by spectral analysis of heart rate variability in incremental maximal tests. A: Computers in Cardiology. "Computing in Cardiology 2010". Belfast: 2010, p. 939-942.
URIhttp://hdl.handle.net/2117/10729
ISBN0276-6574
Publisher versionhttp://www.cinc.org/archives/2010/
Collections
Share: