Study of the economical effects of airways and directs using NEST 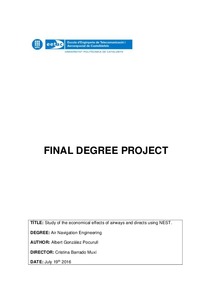 Except where otherwise noted, content on this work is licensed under a Creative Commons license : Attribution-NonCommercial-NoDerivs 3.0 Spain
Abstract
This final degree project analyses the economic effects and the en-route charges difference billed to the airspace users when using directs instead of conventional routing, concretely focusing on the cross-border operations. This analysis assesses the traffic data of the flights performed in the European Airspace during February and March of 2016 by means of the software NEST. The main purpose that is pursued is to find out the benefits that would be obtained by changing the current situation, where most directs are done under air traffic controller clearance, to a full implementation of the directs in the routes network which would enable the airspace users introduce these operations in their flightplans. The main tasks of the project accomplished to achieve the objective are fundamentally two. On the one hand, find and evaluate several cross-border directs frequently performed, and compute the savings that would suppose its publication in the airspace charts. On the other hand, from some of these cases, the ones that involve more savings, make a formal proposal of implementation, bearing in mind all the necessary requirements that their introduction have to fulfill. Regarding the conclusions of the work, it has been confirmed some aspects already expected, like the huge amount of directs that are performed everyday along the European Airspace. However, the main issue is that most of them are not published in the route network. This situation, and specially when performing cross-border directs, implies an unnecessary increase of the air traffic controllers workload which could endanger the safety of the operations. Moreover, it has been found that the publication of cross-border directs would imply in most of the cases a reduction in en-route charges which would be beneficial for airspace users but detrimental for the air navigation service providers. Finally, aiming to modernize the European airspace and with this increase the economic benefits of all the stakeholders, it is proposed an impartial solution. This solution would be to increase the charges applied for the use of cross-border directs, this situation would be beneficial for both parties because air navigation service providers would keep the same billing income and airspace users would reduce fuel consume and the flight time.
SubjectsNavigation (Aeronautics), Aviació comercial
DegreeGRAU EN ENGINYERIA D'AERONAVEGACIÓ (Pla 2010)
URIhttp://hdl.handle.net/2117/107255
Collections
Share: