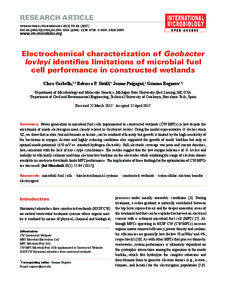 Microbial Fuel Cells implemented in Constructed Wetlands (CW-MFCs) show limited performance. Geobacter Lovleyi has been demonstrated to be one of the predominant bacterial species in active CW-MFCs. The aim of this study was to characterize the growth of G.Lovleyi so as to identify if it could be a source for the observed CW-MFCs low performances. To this aim, G. Lovelyi was grown under three different electron donors (acetate, lactate and formate) and two electron acceptors (fumarate and Fe(III) citrate). G. Lovleyi growing and electron transfer characteristics was also studied by inoculating it in double chambered MECs (anodes poised at 31, 450 and 771 mV). Results showed that its growth was supported by acetate, with doubling times of 4.4±0.1 and 8±0.1 hours for fumarate and Fe(III) citrate as electron acceptors, respectively. G. Lovleyi was also demonstrated to be highly intolerant to oxygen, requiring cysteine as a reducing agent. In contrast, formate and lactate did not support cell growth even in the presence of cysteine. Maximum currents achieved were that of 0.08 mA and 0.26 mA for the MECs operated at 450 mV and 771 mV, respectively. However, no current was observed at 31mV. Confocal laser scanning microscopy (CLSM) analysis showed poor electrode coverage, indicating that G. Lovleyi did not attach to the electrode effectively. According to these results, low performances of CW-MFCs could by at least partially explained by the inability of G. lovleyi to oxidize the wide range of metabolites present in CW, to tolerate even trace oxygen concentrations or to efficiently attach to electrodes surface.
CitationCorbella, C., P. Steidl, R., Puigagut, J., Reguera, G. Electrochemical characterization of Geobacter lovleyi identifies limitations of microbial fuel cell performance in constructed wetlands. "International microbiology", Abril 2017, vol. 20, núm. 2, p. 55-64.
URIhttp://hdl.handle.net/2117/107224
DOI10.2436/20.1501.01.285
ISSN1139-6709
Publisher versionhttp://revistes.iec.cat/index.php/IM/article/view/143202