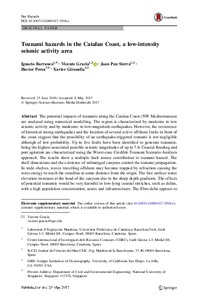 The potential impacts of tsunamis along the Catalan Coast (NW Mediterranean) are analysed using numerical modelling. The region is characterized by moderate to low seismic activity and by moderate- to low-magnitude earthquakes. However, the occurrence of historical strong earthquakes and the location of several active offshore faults in front of the coast suggest that the possibility of an earthquake-triggered tsunami is not negligible although of low probability. Up to five faults have been identified to generate tsunamis, being the highest associated possible seismic magnitudes of up to 7.6. Coastal flooding and port agitation are characterized using the Worst-case Credible Tsunami Scenario Analysis approach. The results show a multiple fault source contribution to tsunami hazard. The shelf dimensions and the existence of submerged canyons control the tsunami propagation. In wide shelves, waves travelling offshore may become trapped by refraction causing the wave energy to reach the coastline at some distance from the origin. The free surface water elevation increases at the head of the canyons due to the sharp depth gradients. The effects of potential tsunamis would be very harmful in low-lying coastal stretches, such as deltas, with a high population concentration, assets and infrastructures. The Ebro delta appears to be the most exposed coast, and about the 20% of the delta surface is prone to flooding due to its extremely low-lying nature. The activity at Barcelona port will be severely affected by inflow backflow current at the entrance of up to 2 m/s.