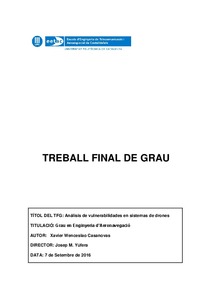 We are currently living a transition period, in the aeronautical world drone related technologies are recently improving and extending, growing exponentially due to expenses reductions and social mass approval. Nowadays, any person can buy a small UAV, capable of performing short flights. Also, there is a daily improvement of specs, so endurance is improved, and maximum flight attitudes and performances get better too. However, the faster growing of this technologies have also implied the more number of related incidents, causing in lot of situations the infringement of the people's safety. For instance, there have been some situations where drones have been sighted flying through airports, forcing airplanes realizing abnormal maneuvers. This written project has the objective to perform a first analysis of the drone's vulnerabilities, in order to take and advance for maintaining the general safety. We have to take into account that we will only study small aircrafts, due to military and bigger non managed aircrafts are out of scope. We will perform a first analysis of the most capable aspects of the drones in terms of exploitation and from a theoretical point of view - some of them are jamming, spoofing, hijacking and others-, with the intention of get a general vision of what are the most valuable vulnerabilities , and suggest some future researches in order to develop them. Finally, we will finish our project with a meditation about ethical issues about who can care the responsibility of exploiting these vulnerabilities. We will write our final conclusions and get an idea about the general situation and how we could continue from this point. As we will see in our conclusions, there are several future working lines that could be continued in the future by the degree students.
SubjectsDrone aircraft, Avions no tripulats
URIhttp://hdl.handle.net/2117/107215