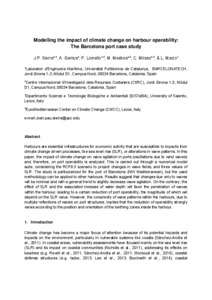 Harbours are essential infrastructures for economic activity that are susceptible to impacts from climate change driven processes, like sea level rise (SLR), or alterations in wave patterns. In this paper, the impact of climate change on wave agitation in ports (oscillations due to wind waves) and, therefore, on port operability is analyzed. This is carried out through a numerical model suite, considering the RCP8.5 scenario to project changes in wave fields, and three values of SLR. The study is particularized for the port of Barcelona (NW Mediterranean), but the used methodology can be applied to other harbours. Results suggest that changes due only to waves will be minimal and with a general trend to slightly decrease wave agitation. On the contrary, the effect of SLR and the associated increase of water depth will favor the penetration of waves within the harbour, leading to a certain reduction of port operability, the magnitude of which will depend on the SLR value. However, the complexity of wave patterns within the harbours, due to multiple reflections of waves on port structures, implies that the reduction of operability strongly varies according to the position and orientation of the berthing zones inside the harbour.
CitationSierra, J.P., Piero Lionello, Mestres, M., Mösso, C. Modelling the impact of climate change on harbour operability: the Barcelona port case study. "Ocean engineering", Setembre 2017, vol. 141, p. 64-78.
URIhttp://hdl.handle.net/2117/107211
DOI10.1016/j.oceaneng.2017.06.002
ISSN0029-8018
Publisher versionhttp://www.sciencedirect.com/science/article/pii/S0029801817302974