Revisiting the ENSO Teleconnection to the Tropical North Atlantic 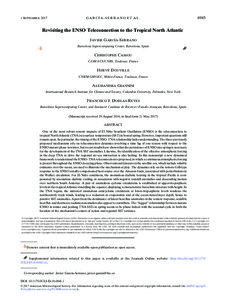 One of the most robust remote impacts of El Niño–Southern Oscillation (ENSO) is the teleconnection to tropical North Atlantic (TNA) sea surface temperature (SST) in boreal spring. However, important questions still remain open. In particular, the timing of the ENSO–TNA relationship lacks understanding. The three previously proposed mechanisms rely on teleconnection dynamics involving a time lag of one season with respect to the ENSO mature phase in winter, but recent results have shown that the persistence of ENSO into spring is necessary for the development of the TNA SST anomalies. Likewise, the identification of the effective atmospheric forcing in the deep TNA to drive the regional air–sea interaction is also lacking. In this manuscript a new dynamical framework to understand the ENSO–TNA teleconnection is proposed, in which a continuous atmospheric forcing is present throughout the ENSO decaying phase. Observational datasets in the satellite era, which include reliable estimates over the ocean, are used to illustrate the mechanism at play. The dynamics rely on the remote Gill-type response to the ENSO zonally compensated heat source over the Amazon basin, associated with perturbations in the Walker circulation. For El Niño conditions, the anomalous diabatic heating in the tropical Pacific is compensated by anomalous diabatic cooling, in association with negative rainfall anomalies and descending motion over northern South America. A pair of anomalous cyclonic circulations is established at upper-tropospheric levels in the tropical Atlantic straddling the equator, displaying a characteristic baroclinic structure with height. In the TNA region, the mirrored anomalous anticyclonic circulation at lower-tropospheric levels weakens the northeasterly trade winds, leading to a reduction in evaporation and of the ocean mixed layer depth, hence to positive SST anomalies. Apart from the dominance of latent heat flux anomalies in the remote response, sensible heat flux and shortwave radiation anomalies also appear to contribute. The “lagged” relationship between mature ENSO in winter and peaking TNA SSTs in spring seems to be phase locked with the seasonal cycle in both the location of the mechanism’s centers of action and regional SST variance.
CitationGarcía-Serrano, J. [et al.]. Revisiting the ENSO Teleconnection to the Tropical North Atlantic. "Journal of Climate", Setembre 2017, vol. 30, núm. 17, p. 6945-6957.
URIhttp://hdl.handle.net/2117/107193
DOI10.1175/JCLI-D-16-0641.1
ISSN0894-8755
Publisher versionhttp://journals.ametsoc.org/doi/abs/10.1175/JCLI-D-16-0641.1