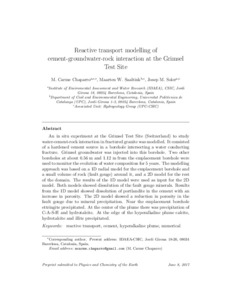 An in situ experiment at the Grimsel Test Site (Switzerland) to study water-cement-rock interaction in fractured granite was modelled. It consisted of a hardened cement source in a borehole intersecting a water conducting fracture. Grimsel groundwater was injected into this borehole. Two other boreholes at about 0.56 m and 1.12 m from the emplacement borehole were used to monitor the evolution of water composition for 5 years. The modelling approach was based on a 1D radial model for the emplacement borehole and a small volume of rock (fault gouge) around it, and a 2D model for the rest of the domain. The results of the 1D model were used as input for the 2D model. Both models showed dissolution of the fault gouge minerals. Results from the 1D model showed dissolution of portlandite in the cement with an increase in porosity. The 2D model showed a reduction in porosity in the fault gouge due to mineral precipitation. Near the emplacement borehole ettringite precipitated. At the centre of the plume there was precipitation of C-A-S-H and hydrotalcite. At the edge of the hyperalkaline plume calcite, hydrotalcite and illite precipitated.
CitationChaparro, M., Saaltink, M., Soler, J. Reactive transport modelling of cement-groundwater-rock interaction at the Grimsel Test Site. "Physics and chemistry of the Earth", Juny 2017, vol. 99, p. 64-76.
URIhttp://hdl.handle.net/2117/107120
DOI10.1016/j.pce.2017.05.006
ISSN1474-7065
Publisher versionhttp://www.sciencedirect.com/science/article/pii/S1474706516302455