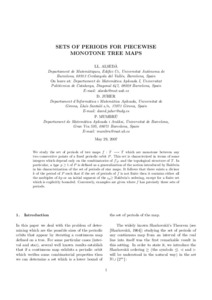 Show full item record
Alseda Soler, Lluís
Juher, D.
Mumbrú i Rodriguez, Pere
Document typeArticle
Rights accessOpen Access
Abstract
We study the set of periods of tree maps f : T −→ T which are monotone between any two consecutive points of a fixed periodic orbit P. This set is characterized in terms of some integers which depend only on the combinatorics of f|P and the topological structure of T. In particular, a type p ≥ 1 of P is defined as a generalization of the notion introduced by Baldwin in his characterization of the set of periods of star maps. It follows that there exists a divisor k of the period of P such that if the set of periods of f is not finite then it contains either all the multiples of kp or an initial segment of the kp≥ Baldwin’s ordering, except for a finite set which is explicitly bounded. Conversely, examples are given where f has precisely these sets of periods.
URIhttp://hdl.handle.net/2117/1071
Collections
Share: