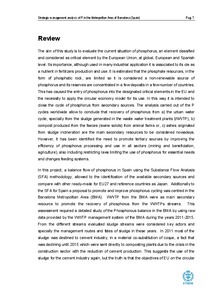 Document typeMaster thesis (pre-Bologna period)
Rights accessOpen Access
Abstract
The aim of this study is to evaluate the current situation of phosphorus, an element classified and considered as critical element by the European Union, at global, European and Spanish level. Its importance, although used in many industrial application it is associated to its ole as a nutrient in fertilizers production and use. It is estimated that the phosphate resources, in the form of phosphatic rock, are limited so it is considered a non-renewable source of phosphorus and its reserves are concentrated in a few deposits in a few number of countries. This has caused the entry of phosphorus into the designated critical elements in the EU and the necessity to apply the circular economy model for its use. In this way it is intended to close the cycle of phosphorus from secondary sources. The analysis carried out of the P cycles worldwide allow to conclude that recovery of phosphorus from a) the urban water cycle, specially from the sludge generated in the waste water treatment plants (WWTP), b) compost produced from the faeces (swine solids) from animal farms or, c) ashes originated from sludge incineration are the main secondary resources to be considered nowadays. However, it has been identified the need to promote tertiary sources by improving the efficiency of phosphorus processing and use in all sectors (mining and beneficiation, agriculture), also including restricting laws limiting the use of phosphorus for essential needs and changes feeding systems. In this project, a balance flow of phosphorus in Spain using the Substance Flow Analysis (SFA) methodology, allowed to the identification of the available secondary sources and compare with other ready-made for EU27 and reference countries as Japan. Additionally to the SFA for Spain a proposal to promote and improve phosphorus cycling was centred in the Barcelona Metropolitan Area (BMA). WWTP from the BMA were as main secondary resource to promote the recovery of phosphorus from the WWTPs streams. This assessment required a detailed study of the Phosphorous balance in the BMA by using raw data provided by the WWTP management system of the BMA during the years 2011-2015. From the different streams evaluated sludge streams were considered key actors and specially the management routes and fates of sludge in these years. In 2011 most of the sludge was destined to cement industry, in a material co-substitution of coque, a fact that was declining until 2015 which were sent directly to composting plants due to the crisis in the construction sector with the reduction of cement production. This suggests the use of the sludge for the cement industry again, but the truth is that the objectives of EU on the circular economy approach for critical elements will cause that sewage sludge would not be use by the cement industry and then different sewage sludge options promoting the recovery of phosphorus will be needed. From these premises, four scenarios, postulating P-cycling options in the BMA by proposing the integration of different sludge management processes (anaerobic digestion, monoincineration, composting and recovery technology phosphorous, called Ecophos) were raised and evaluated in this project. Combining each other, a detailed analysis for energy balances, mass balances, phosphorus recovery, environmental and economic impact has been performed.
SubjectsCircular economy, Sewage -- Purification -- Phosphorus removal, Aigües residuals -- Depuració -- Eliminació de fòsfor, Economia circular
DegreeENGINYERIA INDUSTRIAL (Pla 1994)
URIhttp://hdl.handle.net/2117/107094
Collections
Share: