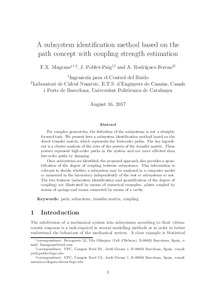 Document typeArticle
Rights accessOpen Access
Abstract
For complex geometries, the definition of the subsystems is not a straightforward task. We present here a subsystem identification method based on the direct transfer matrix, which represents the first-order paths. The key ingredient is a cluster analysis of the rows of the powers of the transfer matrix. These powers represent high-order paths in the system and are more affected than low-order paths by damping. Once subsystems are identified, the proposed approach also provides a quantification of the degree of coupling between subsystems. This information is relevant to decide whether a subsystem may be analysed in a computer model or measured in the laboratory independently of the rest or subsystems or not. The two features (subsystem identification and quantification of the degree of coupling) are illustrated by means of numerical examples: plates coupled by means of springs and rooms connected by means of a cavity.
CitationMagrans, F.X., Poblet-Puig, J., Rodriguez-Ferran, A. A subsystem identification method based on the path concept with coupling strength estimation. "Mechanical systems and signal processing", Febrer 2018, vol. 100, p. 588-604.
URIhttp://hdl.handle.net/2117/107082
DOI10.1016/j.ymssp.2017.07.043
ISSN0888-3270
Publisher versionhttp://www.sciencedirect.com/science/article/pii/S0888327017304077
Collections
Share: