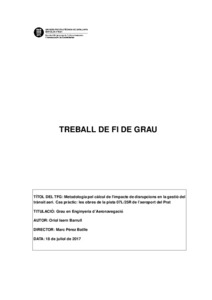 This project has developed a methodology to assess the impact on air traffic management of alterations that affect some of the air transport processes and conclude if the strategic planning of the event has been good enough. This methodology is based on the analysis of different indicators that aim to evaluate the following areas: safety, capacity, efficiency, equity and environmental impact. After that, the methodology has been applied to the temporary closure of the 07L / 25R runway of the Barcelona-El Prat airport due to pavement regeneration works during January and February 2017. In order to carry out the application of the methodology, NEST files obtained from Eurocontrol and an aircraft data receiver were used as data sources. Then, considering the available data the process of selecting the areas and indicators has taken place. A summary of those ones used in the application process can be found in Appendix E. After that, in order to obtain the final results and assess the impact of the works, the values of the indicators have been obtained for the whole period in which the works were developed and for an equivalent period without works (same days of the works of the previous year or February 2017 days depending on the data source used for each indicator). The results obtained have showed an increase in the number of operations / hour during the period of works compared to last year together with a redistribution of the operations so that those less active time slots have received a greater volume of traffic. On the other hand, with regard to efficiency, it stands out that delays are increased during the works. Finally, safety indicator have showed similar levels in both periods and equity has been respected when applying the different regulations. Finally, it has been concluded that the strategic planning has been satisfactory for the majority of indicators except in the case of punctuality, where there was room for improvement when facing the situation of the runway works. On the other hand, the application of the methodology has shown its usefulness to analyze situations such as the one studied here. Nevertheless, it has to be said that there are still aspects to improve, especially in relation to the validation of the methodology.
SubjectsNavigation (Aeronautics), Aeroports -- Catalunya -- Barcelona