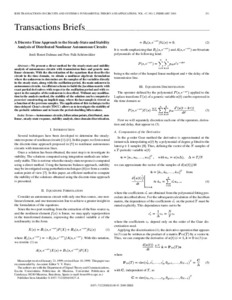 Document typeConference report
PublisherInstitute of Electrical and Electronics Engineers (IEEE)
Rights accessOpen Access
All rights reserved. This work is protected by the corresponding intellectual and industrial property rights. Without prejudice to any existing legal exemptions, reproduction, distribution, public communication or transformation of this work are prohibited without permission of the copyright holder
Abstract
We present a direct method for the steady-state and stability analysis of autonomous circuits with transmission lines and generic nonlinear elements. With the discretization of the equations that describe the circuit in the time domain, we obtain a nonlinear algebraic formulation where the unknowns to determine are the samples of the variables directly in the steady state, along with the oscillation period, the main unknown in autonomous circuits. An efficient scheme to build the Jacobian matrix with exact partial derivatives with respect to the oscillation period and with respect to the samples of the unknowns is described. Without any modification in the analysis method, the stability of the solution can be computed a posteriori constructing an implicit map, where the last sample is viewed as a function of the previous samples. The application of this technique to the time-delayed Chua's circuit (TDCC) allows us to investigate the stability of the periodic solutions and to locate the period-doubling bifurcations.
CitationBonet-Dalmau, J., Palà-Schönwälder, P., Miro, J. A discrete-time approach to the steady-state and stability analysis of distributed nonlinear autonomous circuits. A: IEEE International Symposium on Circuits and Systems. "ISCAS 98 the IEEE International Symposium on Circuits and Systems : proceedings". Monterey. California: Institute of Electrical and Electronics Engineers (IEEE), 1998.
URIhttp://hdl.handle.net/2117/106912
DOI10.1109/81.828576
ISBN0-7803-4458-8 CD-ROM
Publisher versionhttp://ieeexplore.ieee.org/document/828576/
Collections
Share: