A Study of Osona's Medieval Castles 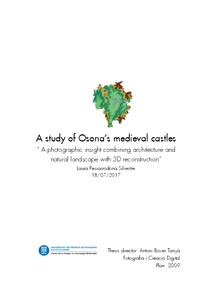 gmail.com
Tutor / directorBover Tanyà, Antoni
Document typeBachelor thesis
Rights accessOpen Access
Abstract
Since ancient times, humans have been fascinated with past cultures. Unlike other material culture, getting hold of the architectural legacy of past civilizations is often difficult, as buildings have been demolished, build upon, repurposed or consumed by nature. Moreover, restoring the few historical buildings that have survived the passage of time is often an arduous and extremely expensive process. Computer- generated imagery offers a cost-effective alternative to look back at the past. The present study aimed at creating a 3D reconstruction of the medieval architecture within the region of Osona. We started by gathering geographical data to create a 3D topographical model; then using manual 3D modelling to reconstruct 4 medieval castles from in situ photographs and historical blueprints. The outcome of both simulations was finally merged to produce a realistic view of how the castles stood at their heyday. The methodology and techniques developed in this project can be applied to virtually reconstruct other historical buildings and their surroundings, making it a valuable tool for professionals (e.g. historians, archaeologists) as well as organizations (e.g. museums, tourist information centers). Further, our work will facilitate the interpretation of the remnants of ancient buildings, helping promulgate the importance of the architectural legacy of a given site by making it more accessible to the general public.
SubjectsThree-dimensional imaging, Photography in archaeology, Castles--Spain, Imatges tridimensionals, Fotografia en arqueologia, Castells--Catalunya
DegreeGRAU EN FOTOGRAFIA I CREACIÓ DIGITAL (Pla 2009)
Location
1: Gurb, 08503, Barcelona, Espanya
URIhttp://hdl.handle.net/2117/106874
Collections
Share: