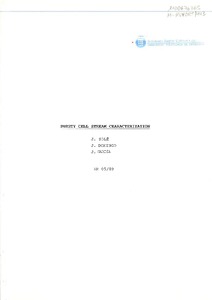 Document typeExternal research report
Rights accessOpen Access
Abstract
Traffic cell stream generated by a single source (or a single connection traffic cell stream) may be characterized by its mean traffic intensity (or normalized mean cell rate) Ai, but also by its burstiness. "Burstiness is an important aspect of IBCN's traffic to be considered, because it is a characteristic of most services in an ATM (Asynchronous Transfer Mode) envirinment [CHE88], [GEL89], [RID89]. Usually ATM cell streams alternate high activity periods (burst) and low or null activity periods (silences). This paper is focused in characterizing the traffic cell streams from the burstiness point of view. In this sense, first we discuss the conceptual aspect of busrtiness and the we propose a mechanism to quantify the traffic cell stream burstiness. To validate this mechanism some axamples are presented, and traffic cell streams of different burstiness are selected and its bursty characteristics commented. Finally, as an application, the behavior of a bus matrix switch element structure with each one of the two kinds of traffic selected is evaluated by simulation and the results are discused.
CitationSolé-Pareta, J., Domingo, J., Garcia, J. "Bursty cell stream characterization". 1989.
URIhttp://hdl.handle.net/2117/106873
Collections
Share: