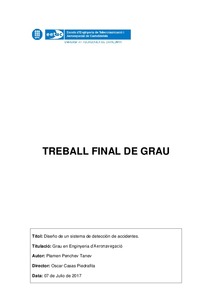 This paper explains the procedure carried out to achieve a prototype of an accident detection system. The system consists in a smartphone application and a hardware installed into the vehicle. In order to start the design, a previous investigation of actual technologies on the market has been made. After analysing the products that are actually offered, a study of possible faults and improvements has been made. Moreover, a brief explanation of cars chassis and most common crash tests is given due to the importance that these elements have for the installation position of the hardware into the vehicle. The goal was to obtain a prototype of an accident detection system that provides ideas for improvements of the actual technologies. For the design, on the one hand a mobile application was developed in order to offer the user the possibility to store personal data that will be useful for the emergency teams in case the occupants of the vehicle get involved in an accident. The application is programmed in Ionic, a framework that uses JavaScript, HTML, CSS, and Angular. In order to store the data of the registered users it was used a free database named Firebase, which belongs to Google. On the other hand, for the hardware was used the Arduino Uno Wifi microcontroller, an absolute orientation sensor named 9 Axis Axes Motion Shield that is in charge of measuring the orientation and the acceleration or decelerations of the vehicle. The idea is to store all the data of the application into the microcontroller or in an external memory shield, which will be the one that will take the action of sending all data of the occupants of the vehicle without the need of the smartphone. The results measured by the gyroscope and accelerometer will be compared to already set thresholds values and the microcontroller will send the user's position and information when one or more acceleration / deceleration threshold values are exceeded.
SubjectsAircraft accidents, Aviació--Accidents
URIhttp://hdl.handle.net/2117/106855