A systematic analysis of scoring functions in rigid-body protein docking: The delicate balance between the predictive rate improvement and the risk of overtraining 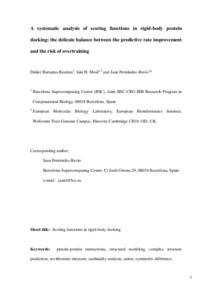 Show full item record
Barradas-Bautista, Didier
Moal, Iain H.
Fernández-Recio, Juan
Document typeArticle
PublisherWiley
Rights accessOpen Access
Abstract
Protein-protein interactions play fundamental roles in biological processes including signaling, metabolism, and trafficking. While the structure of a protein complex reveals crucial details about the interaction, it is often difficult to acquire this information experimentally. As the number of interactions discovered increases faster than they can be characterized, protein-protein docking calculations may be able to reduce this disparity by providing models of the interacting proteins. Rigid-body docking is a widely used docking approach, and is often capable of generating a pool of models within which a near-native structure can be found. These models need to be scored in order to select the acceptable ones from the set of poses. Recently, more than 100 scoring functions from the CCharPPI server were evaluated for this task using decoy structures generated with SwarmDock. Here, we extend this analysis to identify the predictive success rates of the scoring functions on decoys from three rigid-body docking programs, ZDOCK, FTDock, and SDOCK, allowing us to assess the transferability of the functions. We also apply set-theoretic measure to test whether the scoring functions are capable of identifying near-native poses within different subsets of the benchmark. This information can provide guides for the use of the most efficient scoring function for each docking method, as well as instruct future scoring functions development efforts.
CitationBarradas-Bautista, D.; Moal, I. H.; Fernández-Recio, J. A systematic analysis of scoring functions in rigid-body protein docking: The delicate balance between the predictive rate improvement and the risk of overtraining. "Proteins", Juliol 2017, vol. 85, núm. 7, p. 1287-1297.
URIhttp://hdl.handle.net/2117/106838
DOI10.1002/prot.25289
ISSN0887-3585
Publisher versionhttp://onlinelibrary.wiley.com/doi/10.1002/prot.25289/abstract
Collections
Share: