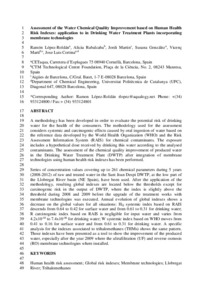 Document typeArticle
PublisherElsevier
Rights accessOpen Access
All rights reserved. This work is protected by the corresponding intellectual and industrial property rights. Without prejudice to any existing legal exemptions, reproduction, distribution, public communication or transformation of this work are prohibited without permission of the copyright holder
Abstract
A methodology has been developed in order to evaluate the potential risk of drinking water for the health of the consumers. The methodology used for the assessment considered systemic and carcinogenic effects caused by oral ingestion of water based on the reference data developed by the World Health Organisation (WHO) and the Risk Assessment Information System (RAIS) for chemical contaminants. The exposure includes a hypothetical dose received by drinking this water according to the analysed contaminants. An assessment of the chemical quality improvement of produced water in the Drinking Water Treatment Plant (DWTP) after integration of membrane technologies was performed. Series of concentration values covering up to 261 chemical parameters over 5 years (2008–2012) of raw and treated water in the Sant Joan Despí DWTP, at the lower part of the Llobregat River basin (NE Spain), were used. After the application of the methodology, the resulting global indexes were located below the thresholds except for carcinogenic risk in the output of DWTP, where the index was slightly above the threshold during 2008 and 2009 before the upgrade of the treatment works including membrane technologies was executed. The annual evolution of global indexes showed a reduction in the global values for all situations: HQ systemic index based on RAIS dropped from 0.64 to 0.42 for surface water and from 0.61 to 0.31 for drinking water; the R carcinogenic index based on RAIS was negligible for input water and varied between 4.2 × 10- 05 and 7.4 × 10- 06 for drinking water; the W systemic index based on the WHO data varied between 0.41 and 0.16 for surface water and between 0.61 and 0.31 for drinking water. A specific analysis for the indexes associated with trihalomethanes (THMs) showed the same pattern.
CitationLopez, R., Rubalcaba, A., Martín-Alonso, J., González, S., Martí, V., Cortina, J. Assessment of the water chemical quality improvement based on human health risk indexes: Application to a drinking water treatment plant incorporating membrane technologies. "Science of the total environment", 1 Gener 2016, vol. 540, p. 334-343.
URIhttp://hdl.handle.net/2117/106804
DOI10.1016/j.scitotenv.2015.04.045
ISSN0048-9697
Publisher versionhttp://www.sciencedirect.com/science/article/pii/S0048969715004969
Collections
Share: