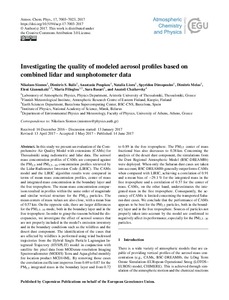 Chaikovsky, Anatoli
Document typeArticle
PublisherEuropean Geosciences Union (EGU)
Rights accessOpen Access
European Commission's projectMACC-III - Monitoring Atmospheric Composition and Climate -III (EC-H2020-633080)
ACTRIS-2 - Aerosols, Clouds, and Trace gases Research InfraStructure (EC-H2020-654109)
Abstract
In this study we present an evaluation of the Comprehensive Air Quality Model with extensions (CAMx) for Thessaloniki using radiometric and lidar data. The aerosol mass concentration profiles of CAMx are compared against the PM2.5 and PM2. 5−10 concentration profiles retrieved by the Lidar-Radiometer Inversion Code (LIRIC). The CAMx model and the LIRIC algorithm results were compared in terms of mean mass concentration profiles, center of mass and integrated mass concentration in the boundary layer and the free troposphere. The mean mass concentration comparison resulted in profiles within the same order of magnitude and similar vertical structure for the PM2. 5 particles. The mean centers of mass values are also close, with a mean bias of 0.57 km. On the opposite side, there are larger differences for the PM2. 5−10 mode, both in the boundary layer and in the free troposphere. In order to grasp the reasons behind the discrepancies, we investigate the effect of aerosol sources that are not properly included in the model's emission inventory and in the boundary conditions such as the wildfires and the desert dust component. The identification of the cases that are affected by wildfires is performed using wind backward trajectories from the Hybrid Single Particle Lagrangian Integrated Trajectory (HYSPLIT) model in conjunction with satellite fire pixel data from MODerate-resolution Imaging Spectroradiometer (MODIS) Terra and Aqua global monthly fire location product MCD14ML. By removing those cases the correlation coefficient improves from 0.69 to 0.87 for the PM2. 5 integrated mass in the boundary layer and from 0.72 to 0.89 in the free troposphere. The PM2.5 center of mass fractional bias also decreases to 0.38 km. Concerning the analysis of the desert dust component, the simulations from the Dust Regional Atmospheric Model (BSC-DREAM8b) were deployed. When only the Saharan dust cases are taken into account, BSC-DREAM8b generally outperforms CAMx when compared with LIRIC, achieving a correlation of 0.91 and a mean bias of −29.1 % for the integrated mass in the free troposphere and a correlation of 0.57 for the center of mass. CAMx, on the other hand, underestimates the integrated mass in the free troposphere. Consequently, the accuracy of CAMx is limited concerning the transported Saharan dust cases. We conclude that the performance of CAMx appears to be best for the PM2.5 particles, both in the boundary layer and in the free troposphere. Sources of particles not properly taken into account by the model are confirmed to negatively affect its performance, especially for the PM2. 5−10 particles.
CitationSiomos, N. [et al.]. Investigating the quality of modeled aerosol profiles based on combined lidar and sunphotometer data. "Atmospheric Chemistry and Physics", 14 Juny 2017, vol. 17, p. 7003-7023.
URIhttp://hdl.handle.net/2117/106763
DOI10.5194/acp-17-7003-2017
ISSN1680-7316
Publisher versionhttps://www.atmos-chem-phys.net/17/7003/2017/
Collections
Share: