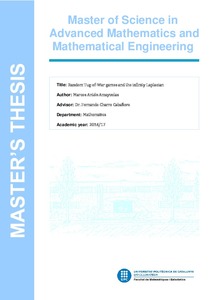 Document typeMaster thesis
Rights accessOpen Access
Abstract
In this work we introduce and analyze a new random Tug-of-War game in which one of the players has the power to decide at each turn whether to play a round of classical random Tug-of-War, or let the other player choose the new game position in exchange of a fixed payoff. We prove that this game has a value and identify the partial differential equation to which it is related. This is the first time that such equation is found to have a relation with game theory. Moreover, our analysis relies on comparison and viscosity tools, in contrast to probabilistic arguments which are more common in the literature. The work also includes a review of the infinity Laplacian and its connection to the classical random Tug-of-War game, as well as an introduction to the theory of viscosity solutions. Furthermore, some explicit examples of the new game are considered.
SubjectsDifferential equations, Elliptic, Equacions diferencials el·líptiques
URIhttp://hdl.handle.net/2117/106761
Collections
Share: