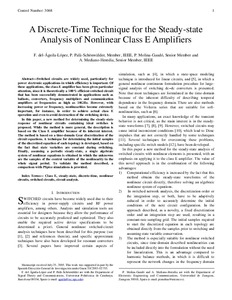 Molina Gaudó, Pilar
Mediano Heredia, Arturo
Document typeArticle
PublisherInstitute of Electrical and Electronics Engineers (IEEE)
Rights accessOpen Access
All rights reserved. This work is protected by the corresponding intellectual and industrial property rights. Without prejudice to any existing legal exemptions, reproduction, distribution, public communication or transformation of this work are prohibited without permission of the copyright holder
Abstract
Switched circuits are widely used, particularly for power electronic applications in which efficiency is important. Of these applications, the class-E amplifier has been given particular attention, since it is theoretically a 100%-efficient switched circuit that has been successfully demonstrated in applications such as ballasts, converters, frequency multipliers, and communication amplifiers at frequencies as high as 10 GHz. However, with increasing power or frequency, nonlinearities become extremely important, for instance, in order to achieve actual class-E operation and even to avoid destruction of the switching device. In this paper, a new method for determining the steady-state response of nonlinear circuits containing ideal switches is proposed. While the method is more general, the description is based on the class-E amplifier because of its inherent interest. The method is based on a time-domain Gear discretization of the circuit equations. A technique for determining the initial samples of the discretized equation of each topology is developed, based on the fact that state variables are constant during switching. Finally, assuming a periodic steady-state, a single algebraic system of nonlinear equations is obtained in which the unknowns are the samples of the control variable of the nonlinearity in the whole signal period. To validate the method described, a comparison with PSpice simulations is provided.
CitationAguila, F., Palà-Schönwälder, P., Molina, P., Mediano, A. A discrete-time technique for the steady-state analysis of nonlinear class-E amplifiers. "IEEE transactions on circuits and systems I: fundamental theory and applications", 11 Juny 2007, vol. 54, núm. 6, p. 1358-1366.
URIhttp://hdl.handle.net/2117/106735
DOI10.1109/TCSI.2007.896741
ISSN1057-7122
Collections
Share: