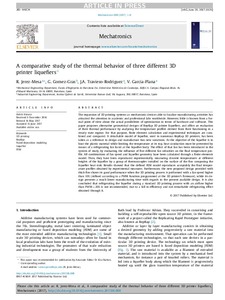 Except where otherwise noted, content on this work is licensed under a Creative Commons license : Attribution-NonCommercial-NoDerivs 3.0 Spain
Abstract
The expansion of 3D printing systems as mechatronic devices able to localize manufacturing activities has attracted the attention in academic and professional labs worldwide. However, little is known from a formal point of view about the actual possibilities of optimization in terms of hardware and software. This paper proposes alternative geometrical designs of RepRap 3D printer liquefiers, and offers an evaluation of their thermal performance by analyzing the temperature profiles derived from their functioning in a steady state regime. For that purpose, finite element calculation and experimental techniques are combined and compared. A detachable model of liquefier, used in numerous RepRap 3D printers, has been taken as a reference to design and manufacture two new variations. As the objective of the liquefier is to heat the plastic material while limiting the temperature at its top, heat conduction must be prevented by means of a refrigerating fan faced at the liquefier body. The effect of that fan has been introduced in the system of study, by evaluating the influence of five different fan velocities on the final temperature profile. All combinations of fan speed and liquefier geometry have been calculated through a finite elements model. Then, they have been reproduced experimentally, measuring discrete temperatures at different heights of the liquefier by a group of thermocouples installed on the surface of the fins composing the liquefier heat sink. Results showed that the defined FEM model reproduces acceptably the final temperature profiles obtained by experimental measures. Furthermore, the new proposed design provided with thick fins shows its good performance when the 3D printing process is performed with a fan speed higher than 10% (defined according to a PWM function programmed at the 3D printer's firmware), while its design presents a much lower manufacturing time with regards to the present available design. It is also concluded that refrigerating the liquefier during a standard 3D printing process with an airflow higher than PWM¿=¿20% is not recommended, due to a fall in efficiency and not remarkable refrigerating effect obtained through it.
CitationJerez-Mesa, R., Gomez, G., Travieso-Rodríguez, J.A., García-Plana, V. A comparative study of the thermal behavior of three different 3D printer liquefiers. "Mechatronics", 29 Juny 2017.
URIhttp://hdl.handle.net/2117/106664
DOI10.1016/j.mechatronics.2017.06.008
ISSN0957-4158
Publisher versionhttp://www.sciencedirect.com/science/article/pii/S0957415817300879
Collections
Share: