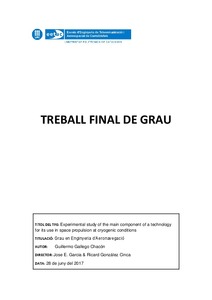 Document typeBachelor thesis
Rights accessOpen Access
Abstract
As the aerospace technology progresses, new challenges emerge which have to be managed and solved to make future space exploration missions possible. This study faces one of these challenges: The efficient long-term storage of cryogenic propellant. Nowadays the available technology is not sufficiently evolved to ensure thermal isolation throughout the entire mission which can be months or even years. It's a given fact that propellant lost due to boil-off will happen. This inevitably calls for the imperative necessity of controlling the bubbles generated by the boiling for two reasons: Firstly, to avoid the loss of thousands of litres of propellant and secondly to prevent the possible generation of foam structures, which could be hazardous at different stages of the mission. Ones of the technology proposed by the UPC Microgravity laboratory to control and eliminate the bubbles is based on the use of ultrasonic acoustic waves, created by piezoelectric devices. The objective of this study is to find a piezoelectric material that works correctly at cryogenic temperatures, more exactly at -253ºC which is the boiling temperature of liquid hydrogen, to obtain the control of the bubbles in the liquid. Our initial hypothesis is based on the possibility of controlling the bubble formation and dynamics in boiling in cryogenic propellant storage tanks by means of an acoustic wave generated by a piezoelectric device. At present, there isn't any piezoelectric ceramic material that works efficiently and is durable at such low temperatures. In fact, the piezoelectric effect has barely been studied at these temperatures, probably due to the lack of applications. However, there are studies about bubble control in liquids by means of acoustic waves in microgravity. The research for a good piezoelectric material for this purpose turns out to be a challenge without any guaranteed success. On the other hand, if such a material was found, it could be used in future space missions. This study is part of an investigation project subsidized by the government for its originality and innovation in the aerospace sector, due to it's the first to focus this problem to the real conditions at cryogenic conditions. Its main focus is on the cryogenic conditions of fluids. To carry out the study, piezoelectric ceramics have been procured and selected specifically for their promising properties, to carry out the intended experiments. The measurements were obtained in the Piezoelectric Materials laboratory of Physics Department of the UPC. The results show that the intended application is not feasible, since the piezoelectric properties of all ceramic materials studied have been decreasing exponentially with temperature up to a minimum at which the desired performance in the targeted range of operating temperatures doesn't appear at all. We conclude that the use of these ceramics, which by its design were initially very promising, must be discarded for the insufficient piezoelectric response under cryogenic conditions. However, the aim of the project is not completely discarded, since there are other possible materials, like piezoelectric crystals that could work as required at very low temperatures.
SubjectsJet propulsion, Propulsió per reacció
URIhttp://hdl.handle.net/2117/106419
Collections
Share: