Potential of katabatic and valley winds for generation of wind energy 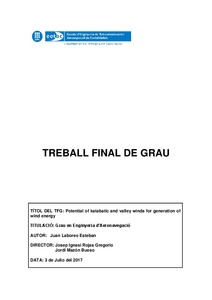 Diurnal mountain wind systems are thermally driven wind systems produced by the buoyancy effects associated with the diurnal cycle of heating and cooling over mountainous terrain. This project evaluates the potential of these winds for generation of wind energy, analysing the effect of different geometric and climatic parameters on the mountainous wind systems, and the considering the performance of wind turbines under these conditions. The suitable turbines will often be of small scale due to the usually weak nature of these winds. This project was conceived as an initial approach to a more ambitious research the purpose of which is to study the feasibility of installing arrays of wind turbines in dams, as a novel alternative to produce renewable energy. This solution, if proven feasible, would provide a second, complementary use of the existing infrastructures in dams for management and distribution of hydroelectric energy. The effects of the thermal difference, height, slope angle, heating of the mountain, ambient stability and other factors relevant to the features of slope and valley winds have been further examined. For this purpose, two theoretical models of slope winds and valley winds have been studied and used, which provided estimated values of wind speed. These data were then used to compute the wind energy that could be potentially produced with several models of turbines. The results show that valley winds might be used as a new alternative in the renewable energy field under specific meteorological and geographical conditions. However, if focusing only on the Mediterranean region, in certain areas, the winds might not be strong enough to produce significant wind energy in an efficient way. Valley winds may reach wind speeds up to 7.5 ms-1, using fixed atmospheric conditions, similar to those found in the Mediterranean region, producing between 0.2 and 0.87 MW per year depending on the performance of the different turbines studied in this project.
SubjectsWind energy conversion systems, Energia eòlica -- Aplicacions industrials
URIhttp://hdl.handle.net/2117/106417