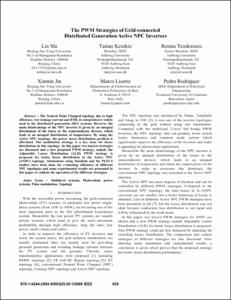 Document typeConference lecture
Rights accessOpen Access
Abstract
The Neutral Point Clamped topology due to high efficiency, low leakage current and EMI, its integration is widely used in the distributed generation (DG) systems. However the main disadvantage of the NPC inverter is given by an unequal distribution of the losses in the semiconductor devices, which leads to an unequal distribution of temperature. By using the Active NPC topology, the power losses distribution problem is alleviated. The modulation strategy is a key issue for losses distribution in this topology. In this paper two known strategies are discussed and a new proposed PWM strategy, namely the Adjustable Losses Distribution (ALD) PWM strategy is proposed for better losses distribution in the Active NPC (ANPC) topology. Simulations using Simulink and the PLECS toolbox have been done for evaluating efficiency of different NPC topologies and some experimental results are presented in this paper to validate the operation of the different strategies.
CitationMa, L. [et al.]. The PWM strategies of grid-connected distributed generation active NPC inverters. A: IEEE Energy Conversion Congress and Exposition. "IEEE Energy Conversion Congress and Exposition 2009". San Jose, California: 2009, p. 920-927.
URIhttp://hdl.handle.net/2117/10641
DOI10.1109/ECCE.2009.5316449
Publisher versionhttp://ieeexplore.ieee.org/search/srchabstract.jsp?tp=&arnumber=5316449&queryText%3DThe+PWM+Strategies+of+Grid-connected+Distributed+Generation+Active+NPC+Inverters%26openedRefinements%3D*%26searchField%3DSearch+All
Collections
Share: