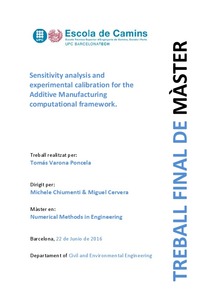 Except where otherwise noted, content on this work is licensed under a Creative Commons license : Attribution-ShareAlike 3.0 Spain
Abstract
A reliable computational framework for the simulation of additive manufacturing by blown powder is crucial for its profitable use in the industrial world. Therefore, this Master Thesis addresses a validation of an in-house finite element software comparing numerical results with campaign data. This data is obtained at SKLSP laboratories in China where a Laser Solid Forming machine is employed to fabricate metal parts directly from CAD models. Additionally, a sensitivity analysis is performed in order to acquire a better knowledge about the influence of material properties on the results. The numerical simulation of additive manufacturing involves the interaction of thermal, mechanical and metallurgical phenomena. For this reason, a large number of material properties are studied in this work. An exhaustive set of simulations has been performed varying several mechanical parameters, such as Poisson’s ratio, Young’s modulus or viscosity, and studying the response in terms of vertical displacements. In an orderly way, the results were stored and plotted to, subsequently, be compared with the experimental data in the calibration and with each others in the sensitivity analysis. The experimental calibration has demonstrated a notorious agreement with the campaign evidence after two major changes: suitable use of Poisson’s ratio temperature dependent values and the introduction of a viscoelastic material response in the constitutive model. The sensitivity analysis has provided a deeper understanding of the phenomenon, placing plasticity, visco-elasticity, and phase change as the main mechanisms which influence the simulation.
SubjectsFramework (Computer file), Framework (Programes d'ordinador)
DegreeMÀSTER UNIVERSITARI EN MÈTODES NUMÈRICS EN ENGINYERIA (Pla 2012)
URIhttp://hdl.handle.net/2117/106405
Collections
Share: