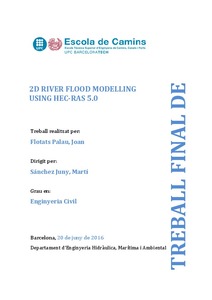 Document typeBachelor thesis
Rights accessOpen Access
Abstract
Flooding may occur as an overflow of water from water bodies, such as a river, lake or ocean, in which the water overtops or breaks levees, resulting in some of that water escaping its usual boundaries. Floods also occur in rivers when the flow rate exceeds the capacity of the river channel. Floods represent the deadliest natural hazard in Europe, resulting in loss of life, damage to buildings, homes, business and structures such as bridges and roads. Since such consequences are highly undesirable for human beings, the need to avoid or at least control them has become obvious. This led to the appearance of hydrodynamic models, numerical tools able to simulate the flow movement, also in case of flooding. Those models would let us know how the flow behaves in certain situations and how to act in consequence in order to avoid those undesirable effects. In April 2016, the new two-dimensional version of HEC-RAS has been released, the so-called HEC-RAS 5.0. This version is especially interesting since all previous versions of HEC-RAS had never been able to simulate flows in two dimensions. The main motivation of this document is to analyse the functionality and workability of HEC-RAS 5.0 regarding two-dimensional river flooding. In order to do so, three different work approaches have been carried out, with further analysis of the correspondent results. First, a detailed intercomparison between the main hydrodynamic models available has been carried out in order to check the features of the new version of HEC-RAS next to another four computational programs. Second, the same case simulation has been performed at the same time for HEC-RAS 5.0 and for Delft3D. The aim of this is to check the reliability and functionality of HEC-RAS new version regarding to 2D river flood modelling next to an already developed two-dimensional model such as Delft3D is. For this simulation, an ideal created prismatic channel has been chosen in order to work in a basic scenario and two approaches have been analysed: steady nonflooding and unsteady flooding cases. Finally, and once its workability has been checked, a more complex case has been simulated with HEC-RAS 5.0. In this case, the scenario is a real case study, consisting in a river flood in the Fluvià River, in Catalonia, Spain, with real data of a return period of 50 years, obtained from Agència Catalana de l’Aigua (ACA) in 2009. The results led to very sensitive output, realistic and similar to the expected and contrasted. Thus, one can conclude that, despite small instabilities were found, HEC-RAS 5.0 is able to perform simple 2D river flood modelling simulations at a similar level of the most advanced two-dimensional programs, such as Delft3D. However, when it comes to very complex simulations, some features, such as combination with transport of substances and water quality or combination with sediment transport and morphological evolution, are not yet available in two dimensions for HEC-RAS 5.0, so one would rather choose a more advanced model.
SubjectsHidrodinàmica, Floods, Hydrodynamics, Inundacions -- Mètodes de simulació
DegreeGRAU EN ENGINYERIA CIVIL (Pla 2010)
URIhttp://hdl.handle.net/2117/106336
Collections
Share: