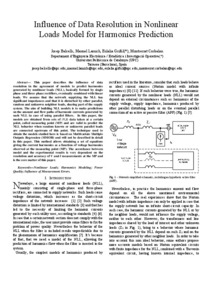 Document typeArticle
Rights accessOpen Access
Abstract
This paper describes the influence of data resolution in the agreement of models to predict harmonics generated by nonlinear loads (NLL), basically formed by single phase and three phase rectifiers, eventually combined with linear loads. We assume that the network supplying the NLL has significant impedances and that it is disturbed by other parallel, random and unknown neighbor loads, sharing part of the supply system. The aim of building NLL models is to make predictions on the amount and flow paths of harmonic currents generated by such NLL in case of using parallel filters. In this paper, the models are obtained from sets of (V,I) data taken at a certain point, called measuring point (MP) and are valid to predict the NLL behavior when random known or unknown parallel loads are connected upstream of this point. The technique used to obtain the models studied here is based on Multivariate Multiple Outputs Regression (MMOR) and will not be described in detail in this paper. This method allows obtaining a set of equations giving the current harmonics as a function of voltage harmonics observed at the measuring point (MP). The accordance between model and the experimental results is very dependent on the resolution and accuracy of V and I measurements at the MP and is the core matter of this paper.
CitationBalcells, J., Lamich, M., Griful, E., Corbalan, M. Influence of data resolution in nonlinear loads model for harmonics prediction. "Proceedings of the 42nd Annual Conference of the IEEE Industrial Electronics Society", 2016, p. 6560-6565.
URIhttp://hdl.handle.net/2117/106333
DOI10.1109/IECON.2016.7793266
Collections
Share: