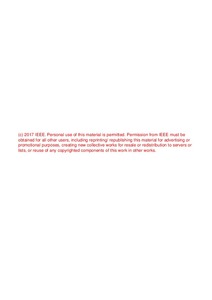 Document typeArticle
PublisherInstitute of Electrical and Electronics Engineers (IEEE)
Rights accessOpen Access
Abstract
This paper presents a new concept in active damping techniques using a reduced model of a LCL-filtered grid connected inverter. The presence of the LCL filter complicates the design of the inverter control scheme, particularly when uncertainties in the system parameters, especially in the grid inductance, are considered. The proposed control algorithm is addressed to overcome such difficulties using a reduced model of the inverter in a state observer. In this proposal, two of the three state variables of the system are obviated from the physical inverter model and only the inverter side current is considered. Therefore, the inverter side current can be estimated emulating the case of an inverter with only one inductor, thus eliminating the resonance problem produced by the LCL filter. Besides, in the case of a distorted grid, the method allows to estimate the voltages at the point of common coupling free of noise and distortion without using any PLL-based synchronization. To complete the control scheme, a theoretical stability analysis is developed considering the effect of the observer, the system discretization and the system parameters deviation. Experimental and comparative evaluation results are presented to validate the effectiveness of the proposed control scheme
CitationGuzman, R., Garcia de Vicuña, J., Castilla, M., Miret, J., De La Hoz, J. Variable structure control for three-phase LCL-filtered inverters using a reduced converter model. "IEEE transactions on industrial electronics", 16 Juny 2017, vol. 65, núm. 1, p. 5-15.
URIhttp://hdl.handle.net/2117/106253
DOI10.1109/TIE.2017.2716881
ISSN0278-0046
Publisher versionhttp://ieeexplore.ieee.org/document/7950940/
Collections
Share: