Comparative analysis of peripheral corneal geometry in health and Keratoconus 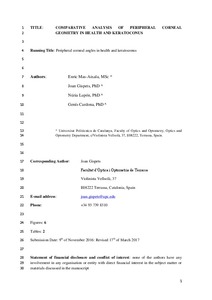 Document typeArticle
Rights accessOpen Access
Abstract
OBJECTIVES:: To describe and compare corneal peripheral angles in normal and keratoconic eyes, to gain a better understanding of the topography of the periphery of the cornea in keratoconus and assist practitioners in the selection and fitting of large diameter contact lenses. METHODS:: Eighty-eight eyes were included in the study, divided into three groups: healthy (A0, 28 eyes), keratoconus at stage I according to the Amsler-Krumeich classification (AI, 33 eyes) and keratoconus at stages II to IV (AII, 27 eyes). The Pentacam Scheimpflug system was used to manually measure the corneal peripheral angles corresponding to a chord length range between 8.6 and 12.6 mm at 8 different peripheral locations. RESULTS:: The peripheral angle was influenced by ocular condition and by the peripheral location, with no interaction effect between both factors. Statistically significant differences were found in mean corneal peripheral angles between groups A0 (30.84°±2.33°) and AI (31.63°±2.02°) (P=0.001) and between A0 and AII (31.37°±2.11°) (P=0.030). The differences between AI and AII were not significant. In all eyes, the largest and smallest peripheral angles were found at the temporal inferior and temporal superior locations, respectively, with a mean difference between largest and smallest of 3.37°±1.42° in healthy eyes and 2.96°±1.54° in keratoconus (AI+AII). CONCLUSION:: Clinically insignificant differences were found in peripheral angles between keratoconus and healthy eyes, giving support to the use of large diameter, intralimbal contact lenses with peripheral designs, and resting on the same corneal region, as those fitted on normal corneas.
CitationMas, E., Gispets, J., Lupon, N., Cardona, G. Comparative analysis of peripheral corneal geometry in health and Keratoconus. "Eye and Contact Lens", 14 Juny 2017, vol. 44, núm. 2, p. 102-108.
URIhttp://hdl.handle.net/2117/106199
DOI10.1097/ICL.0000000000000404
ISSN1542-233X
Collections
Share: