Contagion between United States and european markets during the recent crises 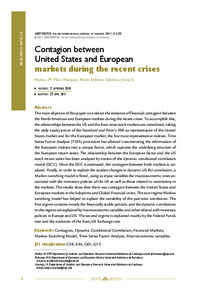 Document typeArticle
Rights accessOpen Access
Abstract
The main objective of this paper is to detect the existence of financial contagion between the North American and European markets during the recent crises. To accomplish this, the relationships between the US and the Euro zone stock markets are considered, taking the daily equity prices of the Standard and Poor’s 500 as representative of the United States market and for the European market, the five most representative indexes. Time Series Factor Analysis (TSFA) procedure has allowed concentrating the information of the European indexes into a unique factor, which captures the underlying structure of the European return series. The relationship between the European factor and the US stock return series has been analyzed by means of the dynamic conditional correlation model (DCC). Once the DCC is estimated, the contagion between both markets is analyzed. Finally, in order to explain the sudden changes in dynamic US-EU correlation, a Markov switching model is fitted, using as input variables the macroeconomic ones associated with the monetary policies of the US as well as those related to uncertainty in the markets. The results show that there was contagion between the United States and European markets in the Subprime and Global Financial crises. The two-regime Markov switching model has helped to explain the variability of the pair-wise correlation. The first regime contains mostly the financially stable periods, and the dynamic correlations in this regime are explained by macroeconomic variables and other related with monetary policies in Europe and US. The second regime is explained mainly by the Federal Funds rate and the evolution of the Euro/US Exchange rate.
CitationMuñoz, M.P., Márquez, D., Sanchez-Espigares, J. Contagion between United States and european markets during the recent crises. "AESTIMATIO, the IEB International Journal of Finance", Juliol 2011, vol. 2011, núm. 2, p. 2-25.
URIhttp://hdl.handle.net/2117/106121
DOI10.5605/ieb
ISSN2173-0164
Collections
Share: