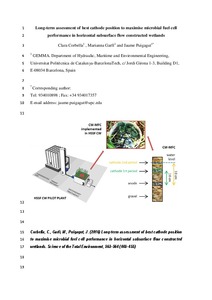 Document typeArticle
PublisherElsevier
Rights accessOpen Access
Abstract
The cathode of microbial fuel cells (MFCs) implemented in constructed wetlands (CWs) is generally set in close contact with water surface to provide a rich oxygen environment. However, water level variations caused by plants evapotranspiration in CWs might decrease MFC performance by limiting oxygen transfer to the cathode. Main objective of this work was to quantify the effect of water level variation on MFC performance implemented in HSSF CW. For the purpose of this work two MFCs were implemented within a HSSF CW pilot plant fed with primary treated domestic wastewater. Cell voltage (E-cell) and the relative distance between the cathode and the water level were recorded for one year. Results showed that E-cell was greatly influenced by the relative distance between the cathode and the water level, giving an optimal cathode position of about 1 to 2 cm above water level. Both water level variation and E-cell were daily and seasonal dependent, showing a pronounced day/night variation during warm periods and showing almost no daily variation during cold periods. Energy production under pronounced daily water level variation was 40% lower (80 +/- 56 mWh/m(2) . day) than under low water level variation (131 +/- 61 mWh/m(2) . day). Main conclusion of the present work is that of the performance of MFC implemented in HSSF CW is highly dependent on plants evapotranspiration. Therefore, MFC that are to be implemented in CWs shall be designed to be able to cope with pronounced water level variations.
CitationCorbella, C., Marianna Garfi', Puigagut, J. Long-term assessment of best cathode position to maximise microbial fuel cell performance in horizontal subsurface flow constructed wetlands. "Science of the total environment", Setembre 2016, vol. 563-564, p. 448-455.
URIhttp://hdl.handle.net/2117/106050
DOI10.1016/j.scitotenv.2016.03.170
ISSN0048-9697
Publisher versionhttp://www.sciencedirect.com/science/article/pii/S0048969716305939
Collections
Share: