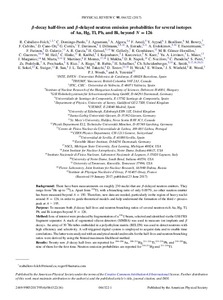 Except where otherwise noted, content on this work is licensed under a Creative Commons license : Attribution-NonCommercial-NoDerivs 3.0 Spain
ProjectDATOS NUCLEARES PARA FISICA NUCLEAR E INGENIERIA NUCLEAR (MICINN-FPA2011-28770-C03-03)
Abstract
Background: There have been measurements on roughly 230 nuclei that are beta-delayed neutron emitters. They range from 8He up to 150La. Apart from 210Tl, with a branching ratio of only 0.007%, no other neutron emitter has been measured beyond A = 150. Therefore, new data are needed, particularly in the region of heavy nuclei around N = 126, in order to guide theoretical models and help understand the formation of the third r-process peak at A ~ 195. Purpose: To measure both ß-decay half-lives and neutron branching ratios of several neutron-rich Au, Hg, Tl, Pb, and Bi isotopes beyond N = 126. Method: Ions of interest were produced by fragmentation of a 238U beam, selected and identified via the GSI-FRS fragment separator. A stack of segmented silicon detectors (SIMBA) was used to measure ion implants and Beta decays. An array of 30 3He tubes embedded in a polyethylene matrix (BELEN) was used to detect neutrons with high efficiency and selectivity. A self-triggered digital system is employed to acquire data and to enable time correlations. The latter were analyzed with an analytical model and results for the half-lives and neutron-branching ratios were derived by using the binned maximum-likelihood method. Results: Twenty new beta-decay half-lives are reported for 204-206Au, 208–211Hg,211–216Tl,215–218Pb, and 218–220Bi, nine of them for the first time. Neutron emission probabilities are reported for 210,211Hg and 211–216Tl.
CitationCaballero-Folch, R., Domingo-Pardo, C., Agramunt, J., Calviño, F., Cortes, G. Beta-decay half-lives and beta-delayed neutron emission probabilities for several isotopes of Au, Hg, Tl, Pb, and Bi, beyond N = 126. "Physical review C", 23 Juny 2017, vol. 95, núm. 6, p. 064322-1-064322-16.
URIhttp://hdl.handle.net/2117/106018
DOI10.1103/PhysRevC.95.064322
ISSN0556-2813
Publisher versionhttps://journals.aps.org/prc/abstract/10.1103/PhysRevC.95.064322
Collections
Share: