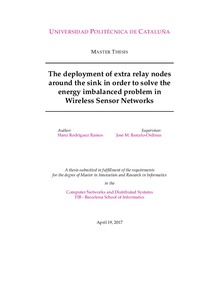 Wireless sensor networks are an emerging technology that has recently gained attention for their potential use in many applications such disaster management, combat field reconnaissance, border protection, object localization, harbors, coal mines, and so on. Sensors in these kind of applications are expected to be remotely deployed and to operate autonomously in unattended environments. Since sensors typically operate on batteries and are often deployed in harsh environment where human operators cannot access them easily, much of the research on wireless sensor networks has focused on the energy depletion in order to achieve energy efficiency to extend the network lifetime. In multihop wireless networks that are often characterized by many to one traffic patterns, it is very common to find problems related to energy depletion. Along the network, sensors experiment different traffic intensities and energy depletion rates. Usually, the sensors near the sink tend to deplete their energy sooner because they act as data originators and data relayers and are required to forward a large amount of traffic of the most remote sensors to the sink while the sensors located in the periphery of the network remain much of the time inactive. Therefore, these sensors located close to the sink tend to die early, leaving areas of the network completely disconnected from the sink reducing the functional network lifetime. In order to achieve equal power consumption at different levels of our network, we have decided to add extra relay nodes to reduce and balance the traffic load that normal nodes have to carry. As mentioned above, each level within the network faces a different amount of traffic, which becomes more intense as we approach the interior levels. This behavior causes that the external nodes, with less traffic to handle, stay more time at rest while the nodes in the inner rings face a great amount of traffic which forces them to be more active, generating a more accelerated exhaustion, reason why nodes located in the inner rings exhaust its battery faster causing the lifetime of the network to come to an end. This work presents a comprehensive analysis on the maximum achievable sensor network lifetime for different deployment strategies (linear, quadratic, and exponential ) in order to equalize the energy consumption rates of all nodes. More specifically the deployment of extra relay nodes around the sink in order to solve the energy imbalanced problem and guarantee that all nodes have balanced energy consumption and die almost at the same time.
SubjectsSensor networks, Wireless communication systems, Xarxes de sensors, Comunicació sense fil, Sistemes de
URIhttp://hdl.handle.net/2117/106010