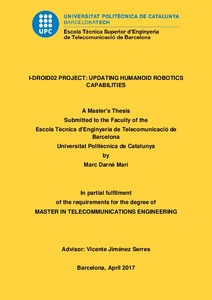 Except where otherwise noted, content on this work is licensed under a Creative Commons license : Attribution-NonCommercial-NoDerivs 3.0 Spain
Abstract
In 2006 RoboTech S.L.R., a company specialized in industrial service robotics and custom electronics, released a new product intended to be bought for the general public. I-Droid01 was a humanoid robot developed together with ARTS Lab, from Scuola Superiore Sant?Anna University placed in Pisa (Italy). I-Droid01 was named as a last-generation robot: aside from being able to move autonomously, thanks to its motor system and many ambient sensors, it included a software inspired by artificial intelligence, adding moods to the robot. However, despite good intentions of the developers, the robot presented some design issues both in hardware and software. Also, the software used to manage I-Droid01 became obsolete beyond year 2009. I-Droid02 Project aspires to upgrade the original I-Droid01 system to current technology. The electronics design has been started from scratch although preserving as much as possible the original features and the robot?s own structure. I-Droid02 improves the fails of its predecessor and leaves the door opened for new hardware and software features to be incorporated. I-Droid02 Project is a wide project of which the initial phase is collected in this thesis. A comprehensive analysis of original I-Droid01 robot is included, as a knowledge basis to understand the I-Droid02 hardware and software design and also to compare obtained results at the end of the thesis. In addition, the software basis that makes accessible all I-Droid02 sensors and actuators to be used by any application and a couple of functional applications are stated in this thesis.
SubjectsRobotics, Raspberry Pi (Computer), Arduino (Programmable controller), Robòtica, Raspberry Pi (Ordinador), Arduino (Controlador programable)
DegreeMÀSTER UNIVERSITARI EN ENGINYERIA DE TELECOMUNICACIÓ (Pla 2013)
URIhttp://hdl.handle.net/2117/105990
Collections
Share: