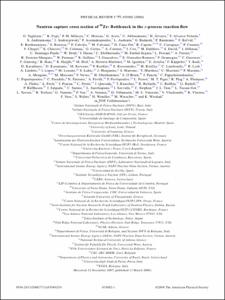 Document typeArticle
Rights accessOpen Access
Abstract
The neutron capture cross sections of the Zr isotopes have important implications in nuclear astrophysics and for reactor design. The small cross section of the neutron magic nucleus 90Zr, which accounts for more than 50% of natural zirconium represents one of the key isotopes for the stellar s-process, because it acts as a bottleneck in the neutron capture chain between the Fe seed and the heavier isotopes. The same element, Zr, also is an important component of the structural materials used in traditional and advanced nuclear reactors. The (n, γ ) cross section has been measured at CERN, using the n TOF spallation neutron source. In total, 45 resonances could be resolved in the neutron energy range below 70 keV, 10 being observed for the first time thanks to the high resolution and low backgrounds at n TOF. On average, the γ widths obtained in resonance analyses with the R-matrix code SAMMY were 15% smaller than reported previously. By these results, the accuracy of the Maxwellian averaged cross section for s-process calculations has been improved by more than a factor of 2.
CitationCalviño, F. [et al.]. Neutron Capture cross section of 90Zr: Bottleneck in the s-process reaction flow. "Physical review C", 11 Març 2008, vol. 77, p. 035802-1-035802-9.
URIhttp://hdl.handle.net/2117/10596
DOI10.1103/PhysRevC.77.035802
ISSN0556-2813
Publisher versionhttp://link.aps.org/doi/10.1103/PhysRevC.77.035802
Collections
Share: