Computational analysis of fire dynamics inside a wind turbine 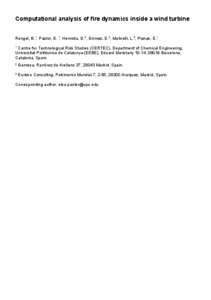 Document typeArticle
Rights accessOpen Access
Abstract
Wind turbines are generally considered cost-effective, reliable and sustainable energy sources. Fires are not common in wind turbines, but a significant number of fires occur every year due to the large number of turbines installed. Wind turbine fires are difficult to extinguish hence significant damage is expected. Due to the unmanned operation, the probability of a turbine being occupied during a fire is very low. However, operators can do several tasks every week, and hence be exposed to a certain risk. Moreover, there is a general lack of information about how a fire develops inside a wind turbine and the subsequent evolution of the tenability conditions during the time required for an eventual evacuation. Gamesa has been working on fire safety since 2013, using CFD fire modelling to provide insights on wind turbine fire development for the design of emergency procedures. The paper describes a fire hazard analysis performed in a Gamesa’s 2.5 MW turbine. A CFD simulation is carried out to estimate the effects during the first minutes of a typical wind turbine fire in an electrical cabinet. Results show that average oxygen concentration at the nacelle remains above 19.5% during the first 10 min; temperature remains below 60°C for 12 min if measured at 1.5 m; and visibility is on average assured at heights lower than 1.5 m, with values above 5 m during the first 8 min in worse locations, implying no danger for personnel. The potential of this type of analysis to design safer wind turbines under performance-based approaches is clearly demonstrated.
CitationRengel, F., Pastor, E., Gómez, E., Hermida, D., Molinelli, L., Planas, E. Computational analysis of fire dynamics inside a wind turbine. "Fire technology", 15 Juny 2017, p. 1-10.
URIhttp://hdl.handle.net/2117/105926
DOI10.1007/s10694-017-0664-0
ISSN0015-2684
Publisher versionhttps://link.springer.com/article/10.1007%2Fs10694-017-0664-0
Collections
Share: