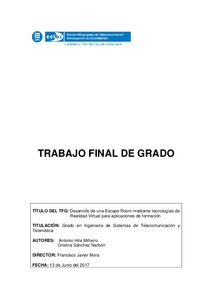 The starting point of the project is the current boom behind emerging technologies such as virtual reality or augmented reality, and the incredibly fast technological evolution on software and hardware allowing a better implementation of hiperrealistic scenarios for creating virtual worlds. Thus, this boom is being translated into a great technological leap of practical application in many fields, thanks to a reasonable cost and maturity, in mass audiovisual devices (mobile devices and their screens, and virtual reality glasses) and with the irruption of other kind of promising devices such as the haptic devices (through traditional game controllers or gloves). On the other hand, the Escape Rooms has become a recent fashion within the group leisure activities, interesting enough due to their apparent simplicity with addicting and engaging mechanisms far beyond the social networks. These are playful experiences developed in closed rooms (a kind of voluntary prisons), based on unusual environments for the regular urban day to day, a recreation of exotic scenarios such as the ancient Egypt, the Amazon jungle, a pirate ship, etc. The main objective of this activity is to "escape" by achieving a set of certain partial goals in a limited period of time, typically during no more than one hour. The goals include fundamentally finding objects, particularly keys to open padlocks, but also may have some jigsaws, quizzes and other challenges where the thinking is combined with some manual skills. In all these short games, the participants test their overall knowledge where they stimulate their ability to reason and to cooperate. The present work is at the intersection of the virtual reality technologies, the escape room mechanisms, and the active learning activities. There is a review of the state of the technology in virtual reality, the basis of the escape rooms, and how virtual reality has been used for teaching and to recreates escape rooms. A proposal is presented to combine all these three areas in one: how to design and implement an escape room by using virtual reality technologies for learning purposes, how this kind of activities can benefit teaching and a specific didactic unit, for consolidating and strengthen the student's knowledge. This work include an example with the list of the different devices necessaries to carry out the experience and the step by step guide to implement it. Finally, an analysis of the experience through some external participants is provided, in order to validate aspects such as usability, immersion and satisfaction of the user, in addition to the technical parameters such as fluidity or lags, for example.
SubjectsVirtual reality, Realitat virtual
URIhttp://hdl.handle.net/2117/105924