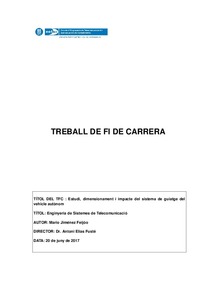 Throughout the recent history of cities internal combustion engine vehicles have been and still are the mainstream mean of transport. As a result of this, some of their inherent problems such as social and environmental impact and even mortality have always been present in our society and dealt with as an unavoidable lesser evil. Nowadays, current scientific and technologic development allows us to finally face the problem by evolving traffic systems with two goals in mind: to increase their efficiency and to remove their past downsites. This project introduces a new traffic guiding model designed for urban areas. In this model there are only autonomous vehicles which are driven by an artificial intelligence instead of classic ones. These new vehicles are routed through 'beacons' deployed throughout the city which act as routers or navigation processing nodes. When a vehicle aproach a beacon its IA receives new instructions to reach the next beacon in the path to the destination. This process repeats until the vehicle reaches the destination. The proposed model borrows some ideas from computer networking principles. Thus, a vechicle could be considered as equivalent to an IP packet. Since a fundamental working peace of IP networks are dynamic routing protocols, it is clear that our model will need an equivalent system to work as well. Despite of our efforts to mimetize computer networks, vehicle traffic networks have some differences (some of them are physically inherent) and therefore some limitations arise. Therefore the same dynamic routing protocols which work for IP networks won't work out of the box for vehicle networks, thus requiring being completely redefined for this new enviroment. Since redifining and implementing a dynamic routing protocol in order to make it fully compatible with vehicle networks would be a very harsh task, in order to better reproduce theese particular conditions which current routing protocols are not designed to take into account, we introduce a Python application which help us analyze this problematic.
SubjectsAutonomous vehicles, Vehicles autònoms
URIhttp://hdl.handle.net/2117/105922