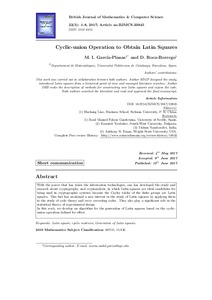 Roca Borrego, Didac
Document typeArticle
Rights accessOpen Access
Abstract
With the power that has taken the information technologies, one has developed the study and research about cryptography, and cryptanalysis, in which Latin squares are ideal candidates for being used in cryptographic systems because the Cayley tables of the finite groups are Latin squares. This fact has awakened a new interest in the study of Latin squares by applying them to the study of code theory and error correcting codes. They also play a significant role in the statistical theory of experimental design. In this work, we develop an algorithm for the generation of Latin squares based on the cyclic-union operation defined for effect
CitationGarcia-Planas, M.I., Roca, D. Cyclic-union operation to obtain latin squares. "British Journal of Mathematics & Computer Science", 2017, vol. 22, núm. 5, p. 1-8.
URIhttp://hdl.handle.net/2117/105914
DOI10.9734/BJMCS/2017/33945
ISSN2231-0851
Publisher versionhttp://www.sciencedomain.org/journal/6
Collections
Share: