Restitution of Barcelona at the end of the third century: models and diffusion of the Colonia Iulia Augusta Faventia Paterna Barcino 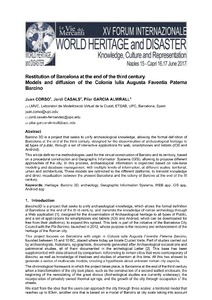 Barcino 3D is a project that seeks to unify archaeological knowledge, allowing the formal definition of Barcelona at the end of the third century, designed for the dissemination of archaeological heritage to all types of public, through a set of interactive applications for web, smartphones and tablets (IOS and Android). This article defines the methodologies used for the virtual construction of Barcino and its territory, based on a procedural construction and Geographic Information Systems (GIS), allowing to propose different approaches of the city. In this process, archaeological information is organized based on rule-base modeling and database management, with multiple levels of information, at different scales: territorial, urban and architectural. These models are optimized to the different platforms, to transmit knowledge and direct visualization between the present Barcelona and the colony of Barcino at the end of the III century.