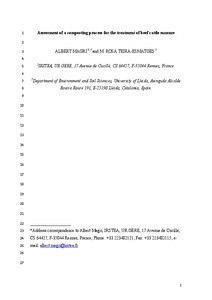 Salvo que se indique lo contrario, los contenidos de esta obra estan sujetos a la licencia de Creative Commons : Reconocimiento-NoComercial-SinObraDerivada 3.0 España
Resumen
The intensive breeding of beef cattle in Juncosa de les Garrigues (Catalonia, Spain) leads to the production of a large volume of manure that needs appropriate management. Land application in the area at agronomic rates is not enough to ensure good management practices, making necessary extended on-farm storage and the export of part of the production to long distances. In this context, the implementation of a collective treatment based on composting could help in enhancing the handling of manure. We assessed a full-scale composting process based on turned windrows (W), and involving treatment of beef cattle manure (CM) alone (two typologies were considered according to carbon-to-nitrogen ratios of ~25 (CM1, W1) and ~14 (CM2, W2)), or mixed with bulking agent (CM2/BA, W3) and dewatered digested sewage sludge (CM2/BA/DDSS, W4). Composting significantly improved the transportability of nutrients (final volumes were 40–54% of the initial volume). Temperature >55°C was reached in all the treatments but following different time patterns. Under the applied conditions of turning and rewetting, 14 weeks of processing did not ensure the production of stable, and mature, compost. Thus, only compost from W1 attained the maximum degree of stability as well as concentration of ammonium–N < 0.01% (with ammonium–N/nitrate–N ratio of 0.2) and low phytotoxicity. However, high pH, salinity, and heavy metal contents (Cu and Zn) may limit its final use. Addition of BA was advised to be kept to minimum, whereas use of DDSS as a co-substrate was not recommended in agreement to the higher loss of N and levels of heavy metals in the final compost.
CitaciónMagrí, A., Teira-Esmatges, R. Assessment of a composting process for the treatment of beef cattle manure. "Journal of environmental science and health. Part B, pesticides food contaminants, and agricultural wastes", 2015, vol. 50, núm. 6, This is an Accepted Manuscript of an article published by Taylor & Francis in Journal of environmental science and health on 2015, available online:10.1080/03601234.2015.1011942 http://www.tandfonline.com/, p. 430-438.
URIhttp://hdl.handle.net/2117/105853
DOI10.1080/03601234.2015.1011942
ISSN0360-1234
Versión del editorhttp://www.tandfonline.com/doi/abs/10.1080/03601234.2015.1011942?journalCode=lesb20
Colecciones
Comparte: