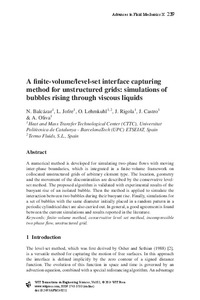 Except where otherwise noted, content on this work is licensed under a Creative Commons license : Attribution-NonCommercial-NoDerivs 3.0 Spain
Abstract
A numerical method is developed for simulating two-phase flows with moving inter-phase boundaries, which is integrated in a finite-volume framework on collocated unstructured grids of arbitrary element type. The location, geometry and the movement of the discontinuities are described by the conservative levelset method. The proposed algorithm is validated with experimental results of the buoyant rise of an isolated bubble. Then the method is applied to simulate the interaction between two bubbles during their buoyant rise. Finally, simulations for a set of bubbles with the same diameter initially placed in a random pattern in a periodic cylindrical duct are also carried out. In general, a good agreement is found between the current simulations and results reported in the literature.
CitationBalcazar, N., Jofre, L., Lehmkuhl, O., Rigola, J., Castro, J., Oliva, A. A finite-volume/level-set interface capturing method for unstructured grids: Simulations of bubbles rising through viscous liquids. A: International Conference on Advances in Fluid Mechanics. "Advances in fluid mechanics X: WIT Transactions on Engineering Sciences, vol. 82". A Coruña: WIT Press, 2014, p. 239-252.
URIhttp://hdl.handle.net/2117/105758
DOI10.2495/AFM140211
ISBN978-184564790-2
Publisher versionhttps://www.witpress.com/elibrary/wit-transactions-on-engineering-sciences/82/27291
Collections
Share: