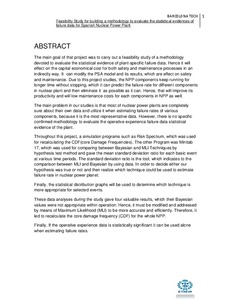 ; de Blas, Alfredo
Document typeUPC Master thesis
Rights accessOpen Access
Abstract
The main goal of that project was to carry out a feasibility study of a methodology devoted to evaluate the statistical evidence of plant-specific failure data. Hence it will effect on the capital economical cost for both safety and maintenance processes in an indirectly way. It can modify the PSA model and its results, which are effect on safety and maintenance. Due to this project studies, the NPP components keep running for longer time without stopping, which it can predict the failure rate for different components in nuclear plant and then eliminate it as possible as it can. Hence, that will improve its productivity and will low maintenance costs for each components in NPP as well. The main problem in our studies is that most of nuclear power plants are completely sure about their own data and utilize it when estimating failure rates of various components, because it is the most representative data. However, there is no specific confirmed methodology to evaluate the operative experience failure data statistical evidence of the plant. Throughout this project, a simulation programs such as Risk Spectrum, which was used for recalculating the CDF(core Damage Frequencies). The other Program was Minitab 17, which was used for comparing between Bayesian and MLI Techniques by hypothesis test method and gave the mean standard deviation ratio for each basic event at various time periods. The standard deviation ratio is the tool, which indicates to the comparison between MLI and Bayesian by using data. In order to decide either our hypothesis was true or not and then realize which technique could be used to estimate failure rate in nuclear power planet. Finally, the statistical distribution graphs will be used to determine which technique is more appropriate for selected events. These data analyses during the study gave four valuable results, which their Bayesian values were not appropriate within operation. Hence, it must be modified and addressed by means of Maximum Likelihood (MLI) to be more accurate and efficiently. Therefore, it led to recalculate the core damage frequency (CDF) for the whole NPP. Finally, If the operative experience data is statistically significant it can be used alone when estimating failure rates.
SubjectsFailure analysis (Engineering), Nuclear power plants -- Maintenance and repair, Risk assessment, Anàlisi de fallades (Enginyeria), Centrals nuclears -- Manteniment i reparació, Avaluació del risc
URIhttp://hdl.handle.net/2117/105742
Collections
Share: