Recovery of nutrients (N-P-K) from potassium-rich sludge anaerobic digestion side-streams by integration of a hybrid sorption-membrane ultrafiltration process: Use of powder reactive sorbents as nutrient carriers 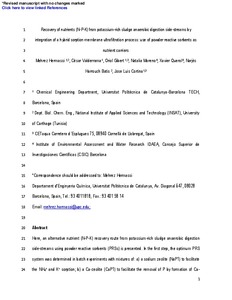 Document typeArticle
Rights accessOpen Access
Abstract
Here, an alternative nutrient (N-P-K) recovery route from potassium-rich sludge anaerobic digestion side-streams using powder reactive sorbents (PRSs) is presented. In the first step, the optimum PRS system was determined in batch experiments with mixtures of: a) a sodium zeolite (NaP1) to facilitate the NH4+ and K+ sorption; b) a Ca-zeolite (CaP1) to facilitate the removal of P by formation of Ca-phosphates (e.g., CaHPO4(s)), and c) caustic magnesia containing mixtures of MgO to facilitate the formation of Mg/NH4/PO4 minerals (e.g., struvite and magnesium phosphates). Evaluation of the continuous and simultaneous N-P-K removal with mixtures of PRSs was carried out using a hybrid sorption/filtration system with ultrafiltration (UF) hollow-fibre membranes. The dosing ratios of the PRS mixtures were optimised on the basis of the equilibrium and kinetic sorption data, and a PRS dose (< 2–5 g PRS/L) was selected to ensure the hydraulic performance of the system. Under such conditions, and with synthetic anaerobic side-stream removal capacities (qt) of 220 ± 10 mg N-NH4/g, 35 ± 5 mg P-PO4/g, and 8 ± 2 mg K/g, removal efficiencies of 32 ± 3, 78 ± 5, and 26 ± 3% for ammonium, phosphate, and potassium, respectively, were obtained for the binary mixtures of NaP1/CaP1 zeolites. Contrary to the batch results, the use of tertiary mixtures of NaP1/CaP1/MgO only improved the K removal capacity and efficiency to 18 ± 2 mg K/g and 55 ± 4%, respectively, while the phosphate removal capacity and efficiency remained unchanged (ca. 35 ± 3 mg P-PO4/g; 80 ± 5%) and the ammonium capacity and efficiency were reduced to 185 ± 12 mg N-NH4/g and 20 ± 2%, respectively, due to the competing Mg2 + ion effect. Nutrient removal trials with real anaerobic side-streams using binary mixtures of Na/Ca zeolites showed a reduction of both the hydraulic performance and the nutrient removal ratios due to the presence of dissolved organic matter. However, constant removal ratios of N, P, and K were recorded throughout the filtration experiments. The loaded PRSs exhibited suitable nutrient release rates and bioavailability as co-substrates for soil quality improvement. Chemical analyses detected the formation of Ca/P/O and Mg/N/P/O neo-minerals; however, the mineralogical data revealed only the formation of struvite, even when no magnesium oxide was used.
CitationHermassi, M., Valderrama, C., Gibert, O., Moreno Palmerola, Natàlia, Querol , X., Harrouch, N., Cortina, J. Recovery of nutrients (N-P-K) from potassium-rich sludge anaerobic digestion side-streams by integration of a hybrid sorption-membrane ultrafiltration process: Use of powder reactive sorbents as nutrient carriers. "Science of the total environment", 5 Maig 2017, vol. 599-600, p. 422-430.
URIhttp://hdl.handle.net/2117/105553
DOI10.1016/j.scitotenv.2017.04.140
ISSN0048-9697
Publisher versionhttp://www.sciencedirect.com/science/article/pii/S0048969717309841
Collections
Share: