Influence of fish swimming on the flow pattern of circular tanks 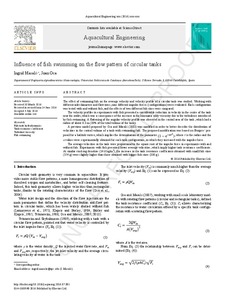 The effect of swimming fish on the average velocity and velocity profile of a circular tank was studied. Working with different inlet diameters and flow rates, nine different impulse forces (configurations) were evaluated. Each configuration was tested with and without fish, and the effects of two different fish sizes were compared. The velocity profiles in experiments with fish presented a considerable reduction in velocity in the centre of the tank near the outlet, which was a consequence of the increase in the kinematic eddy viscosity due to the turbulence introduced by fish swimming. A flattening of the angular velocity profile was observed in the central area of the tank, which had a radius of about 0.3 m (18% of the total volume of the tank). A previous model proposed by Oca and Masaló (2013) was modified in order to better describe the distribution of velocities in the central volume of a tank with swimming fish. The proposed modification was based on Burgers¿ proposal for a bathtub vortex, which implies the determination of the parameter (1¿e¿ar2)(1¿e¿ar2), where r is the radius and the a values were experimentally obtained for each tank configuration, in which they increased with the impulse force. The average velocities in the tank were proportional to the square root of the impulse force in experiments with and without fish. Experiments with fish presented lower average velocities, which imply higher tank resistance coefficients. At similar stocking densities (14.6 kg/m3), the increase in the tank resistance coefficients obtained with small fish sizes (154 g) were slightly higher than those obtained with bigger fish sizes (330 g).
CitationMasaló, I., Oca, J. Influence of fish swimming on the flow pattern of circular tanks. "Aquacultural engineering", 1 Setembre 2016, vol. 74, p. 84-95.
URIhttp://hdl.handle.net/2117/105489
DOI10.1016/j.aquaeng.2016.07.001
ISSN0144-8609
Publisher versionhttp://www.sciencedirect.com/science/article/pii/S0144860916300541