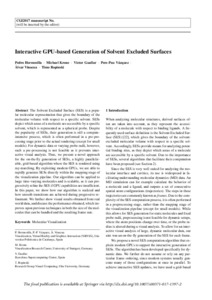 Ropinski, Timo
Document typeArticle
PublisherSpringer
Rights accessOpen Access
All rights reserved. This work is protected by the corresponding intellectual and industrial property rights. Without prejudice to any existing legal exemptions, reproduction, distribution, public communication or transformation of this work are prohibited without permission of the copyright holder
Abstract
The solvent-excluded surface (SES) is a popular molecular representation that gives the boundary of the molecular volume with respect to a specific solvent. SESs depict which areas of a molecule are accessible by a specific solvent, which is represented as a spherical probe. Despite the popularity of SESs, their generation is still a compute-intensive process, which is often performed in a preprocessing stage prior to the actual rendering (except for small models). For dynamic data or varying probe radii, however, such a preprocessing is not feasible as it prevents interactive visual analysis. Thus, we present a novel approach for the on-the-fly generation of SESs, a highly parallelizable, grid-based algorithm where the SES is rendered using ray-marching. By exploiting modern GPUs, we are able to rapidly generate SESs directly within the mapping stage of the visualization pipeline. Our algorithm can be applied to large time-varying molecules and is scalable, as it can progressively refine the SES if GPU capabilities are insufficient. In this paper, we show how our algorithm is realized and how smooth transitions are achieved during progressive refinement. We further show visual results obtained from real-world data and discuss the performance obtained, which improves upon previous techniques in both the size of the molecules that can be handled and the resulting frame rate.
CitationHermosilla, P., Krone, M., Guallar, V., Vázquez, P., Vinacua, A., Ropinski, T. Interactive GPU-based generation of solvent-excluded surfaces. "The visual computer", 8 Maig 2017, vol. 33, núm. 6, p. 869-881.
URIhttp://hdl.handle.net/2117/105444
DOI10.1007/s00371-017-1397-2
ISSN0178-2789
Publisher versionhttps://link.springer.com/article/10.1007%2Fs00371-017-1397-2
Collections
Share: