An Assessment of the Expansion Strategy followed by Avianca Airlines: Period 2008-2012 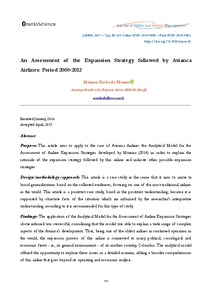 Show full item record
Emboaba Moreira, Mauricio
Document typeArticle
PublisherOmniaScience
Rights accessOpen Access
Abstract
Purpose: This article aims to apply to the case of Avianca Airlines the Analytical Model for the Assessment of Airline Expansion Strategies developed by Moreira (2014) in order to explain the rationale of the expansion strategy followed by this airline and indicate other possible expansion strategies. Design/methodology/approach: This article is a case study in the sense that it aims to arrive to broad generalizations based on the collected evidences, focusing on one of the most traditional airlines in the world. This article is a positivist case study, based in the positivist understanding; because it is supported by objective facts of the situation which are informed by the researcher’s interpretive understanding according to it is recommended for this type of study. Findings: The application of the Analytical Model for the Assessment of Airline Expansion Strategies above referred was successful, considering that the model was able to explain a wide range of complex aspects of the Avianca’s development. Thus, being one of the oldest airlines in continued operation in the world, the expansion process of this airline is connected to many political, sociological and economic facets - ie., its general environment - of its mother country, Colombia. The analytical model offered the opportunity to explore these issues in a detailed manner, adding a broader comprehension of this airline that goes beyond its operating and economic analysis.Originality/value: They reside on the fact that this is the first time that this analytical model is applied to study extensively an actual situation. Besides, airlines in Latin America have not been widely covered by the academia and this is an opportunity to begin to fill this gap. Furthermore, the referred analytical model is applicable to organizations or firms that operate in other industries if the proper adjustments are made. Implications: The implications for the academic research are to understand that the reasons for the success or failure of an airline in an expansion process may be explained by the suitability between the expansion strategy followed by this airline, its business model, its operating environment and its general environment. Moreover, this article demonstrates that the analysis of the suitability of the expansion strategy followed by a specific airline may be made in the light of a solidly founded analytical framework.
CitationEmboaba Moreira, M. An Assessment of the Expansion Strategy followed by Avianca Airlines: Period 2008-2012. "Journal of Airline and Airport Management", Juny 2017, vol. 7, núm. 1, p. 80-105.
URIhttp://hdl.handle.net/2117/105425
DOI10.3926/jairm.63
ISSN2014-4806
Collections
Share: