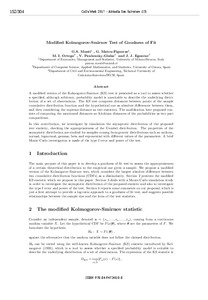 Document typeConference report
Rights accessOpen Access
Abstract
A modified version of the Kolmogorov-Smirnov (KS) test is presented as a tool to assess whether a specified, although arbitrary, probability model is unsuitable to describe the underlying distribution of a set of observations. The KS test computes distances between points of the sample cumulative distribution function and the hypothetical one as absolute differences between them, and then considering the supreme distance as test statistics. The modification here proposed consists of computing the mentioned distances as Aitchison distances of the probabilities as two part compositions. In this contribution, we investigate by simulation the asymptotic distribution of the proposed test statistic, checking the appropriateness of the Gumbel distribution. The properties of the asymptotic distribution are studied for samples coming from generic distributions such as uniform, normal, lognormal, gamma, beta and exponential with different values of the parameters. A brief Monte Carlo investigation is made of the type I error and power of the test.
CitationMonti, G. S., Mateu, G., Ortego, M.I., Pawlowsky, V., Egozcue, J. J. Modified Kolmogorov-Smirnov test of goodness of fit. A: International Workshop on Compositional Data Analysis. "The 7th International Workshop on Compositional Data Analysis Proceedings book". Abbadia San Salvatore: 2017, p. 152-158.
URIhttp://hdl.handle.net/2117/105422
ISBN978-84-947240-0-8
Collections
Share: