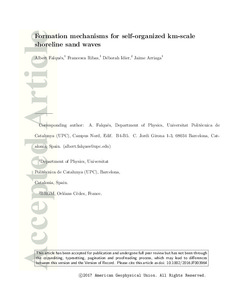 Idier, Déborah
Arriaga García, Jaime Alonso
Document typeArticle
Rights accessOpen Access
Abstract
The feedbacks between morphology and waves through sediment transport are investigated as a source of kilometer-scale shoreline sand waves. In particular, the observed sand waves along Srd. Holmslands Tange, Denmark, are examined. We use a linear stability model based on the one-line approximation, linking the bathymetry to the perturbed shoreline. Previous models that consider the link by shifting the equilibrium profile and neglecting the curvature of the depth contours predict a positive feedback only if the offshore wave incidence angle (¿c) is above a threshold, ¿c¿42°. Considering curvilinear depth contours and using a linearly decaying perturbation in bed level, we find that ¿c can vary over the range 0–90° depending on the background bathymetric profile and the depth of closure, Dc. Associated to the perturbed wave refraction, there are two sources of instability: the alongshore gradients in wave angle, wave angle mechanism, and the alongshore gradients in wave energy induced by wave crest stretching, wave energy mechanism. The latter are usually destabilizing, but the former are destabilizing only for large enough Dc, steep foreshores, and gently sloping shorefaces. The critical angle comes out from the competition between both mechanisms, but when both are destabilizing, ¿c=0. In contrast with earlier studies, the model predicts instability for the Holmslands Tange coast so that the observed sand waves could have emerged from such instability. The key point is considering a larger Dc that is reasonably supported by both observations and wave climate, which brings the wave angle mechanism near the destabilizing threshold.
Location
1: Nr. Lyngvig/Fyrvej, 6960 Hvide Sande, Dinamarca
CitationFalques, A., Ribas, F., Idier, D., Arriaga, J. Formation mechanisms for self-organized kilometer-scale shoreline sand waves. "Journal of Geophysical Research: Earth Surface", 16 Maig 2017.
URIhttp://hdl.handle.net/2117/105391
DOI10.1002/2016JF003964
ISSN2169-9011
Publisher versionhttp://onlinelibrary.wiley.com/doi/10.1002/2016JF003964/abstract;jsessionid=F2EA87708CC3C67F36CEDA6C797A44DE.f03t04
Collections
Share: